Julien CABROL discovered the guitar when he was 10, listening to the famous song “La Grange” of ZZ Top. This 1st musical shock led him to learn classical guitar for 4 years, then electrical guitar, which became his favourite instrument.

His passion for the guitar drove him to train and professionalize. He got fascinated with Van Halen, jazz and jazz-rock. His rock fusion style became more precise. He then discovered the band Toto and his fabulous guitarist Steve Lukather, who overturned his idea of music and his approach of guitar.

Bands came one after another, and Julien played with Ana-M in several festivals, on the radio, on TV and in studios. He has been accompanying quite a few artists too.

Today, he plays with Roxanne and also works as a session man, guitar teacher and composer. His style is resolutely Californian rock, mingling Toto, Joe Bonamassa, blues, jazz and rock. 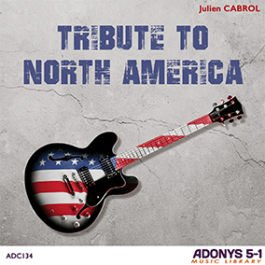