Frédéric Thézé starts his career as a session guitarist (former student of Pierre Cullaz). He collaborates on many live and recording projects and gets to work in major French studios (EMI studio 2, Studio de la grande armée, etc.) as well as in New York (HC&F with Philip Smart), on behalf of majors or freelance.

In the meantime, Frédéric Thézé graduates as a sound engineer (INA sup) and specializes in production music and in the creation of sound identity for “Motion Design”. He then participates in many commercials and corporate films (Crédit Agricole, Swiffer, Lipton, Asic, l’Oréal, Intel, etc.), in branding design of French TV channels (France 3, M6, TF1), in movies «Manu bolonaise» (Quinzaine des Réalisateurs-Cannes 2006), “les Thibault» (France 2 TV) as well as in documentaries such as «Les murs du silence», «Writers» (with Vincent Cassel).

The aim of the «Drones & Textures» album is to provide music built around designed elements acting as a vehicle of sensations or intentions on the collective unconscious in order to strengthen the impact and message of the illustrations. 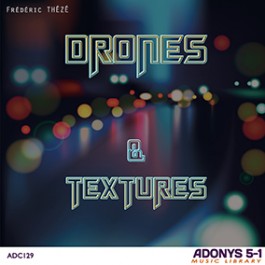